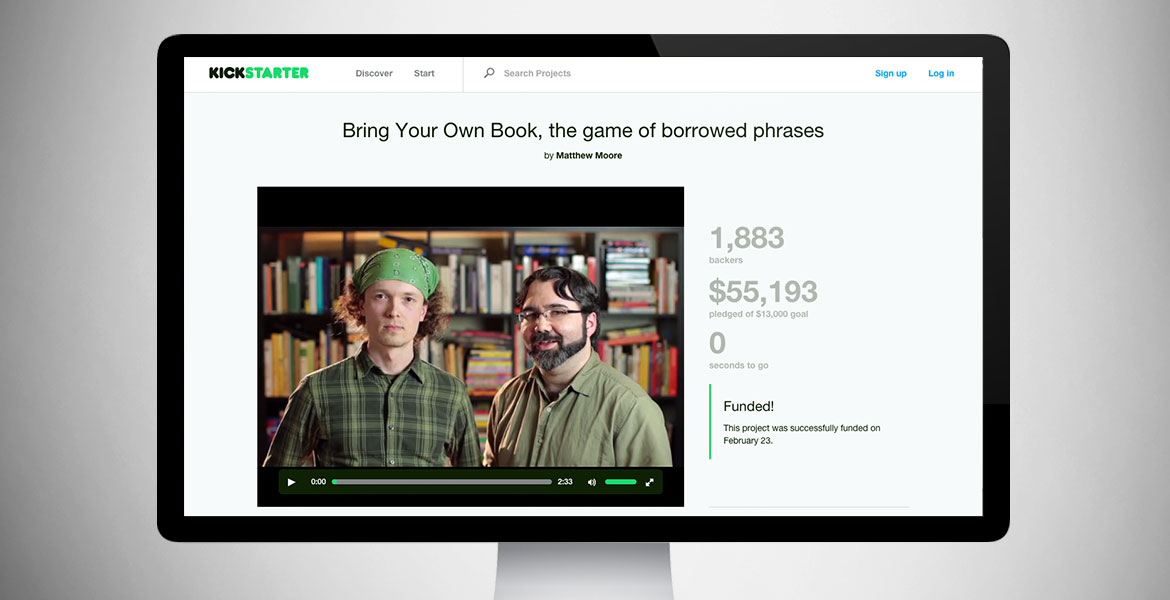 I was approached to produce a short kickstarter video on a very tight timeline. I had less than a week to work out logistics, draw up storyboards, write up a shooting schedule, and coordinate gear and rentals.

Shooting consisted of seven separate setups at two locations and clocked in at a bit over 12 hours total including setup, teardown, and breaks.

For the overhead shots, I constructed a 10-foot boom from two parallel pine 1x4s with 2×4 cross-members. A couple strategically placed tripod mounts and counterweights allowed the camera to be cantilevered out over the edge of the balcony, allowing for a perfectly-composed birds-eye shot. For this shot, the camera was remotely controlled via laptop, and monitored via HDMI. Focus was pulled manually using a bit of gaffers tape on the end of a long pole – not the most elegant solution but it worked!

The panning “circle” shots were shot individually with a 50mm lens from roughly ten feet away. The shots were then stitched together in post-production using a combination of motion-matched wipes, hue shifts, and time-remapping to achieve a seamless look. I even managed to hide an errant light stand by compositing in a potted palm to the left of the lady in the black shirt.

Post-production began the Monday following the shoot, and I exported the final cut on Wednesday afternoon. While it may have been nice to have a bit more time to carry out a more robust audio mastering and color correction pass, I think the video came together nicely.

The Kickstarter project was fully funded within the first four days, largely due to the team’s presence at PAX South. Many of the backers commented that they were impressed by the professionalism of the video and that it played a major role in instilling confidence in the project.

Ryan did amazing work, particularly on a tight schedule. He planned meticulously, sending out storyboards and shot sheets, and in post-production, he fixed little details we probably would have missed. (…) Ryan made sure we got off on the right foot.

My most sincere gratitude for doing such a wicked professional job. Without a doubt, no matter how the Kickstarter goes, I’m super proud of how this turned out and how all the hard work is coming together.